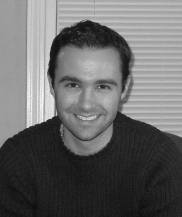 Derek W. Beck, born April 14, 1977, in Cleveland, OH, attended Ohio University’s Honors Tutorial College, Athens, OH, where he graduated with a Bachelor of Science in Physics on June 12, 1999. On this same day, he was commissioned a Second Lieutenant in the United States Air Force. Shortly thereafter, he was assigned to the Los Angeles AFB, as a 61S1D Physicist. He served first as a project manager for a key component of the Space-Based Laser (SBL), part of the Space-Based Laser Integrated Flight Experiment project office, a program since cancelled. Derek moved on to several other short assigments, and in January 2004 as a Captain, Derek began an Educational Leave of Absence to attend the Massachusetts Institute of Technology, Systems Design and Management program, in residence. After leaving Cambridge in early February 2005, Derek was reassigned to Wright-Patterson AFB, Dayton, OH. He later left active duty to become a Reservist, and remains an active Reservist, presently holding the rank of Major.